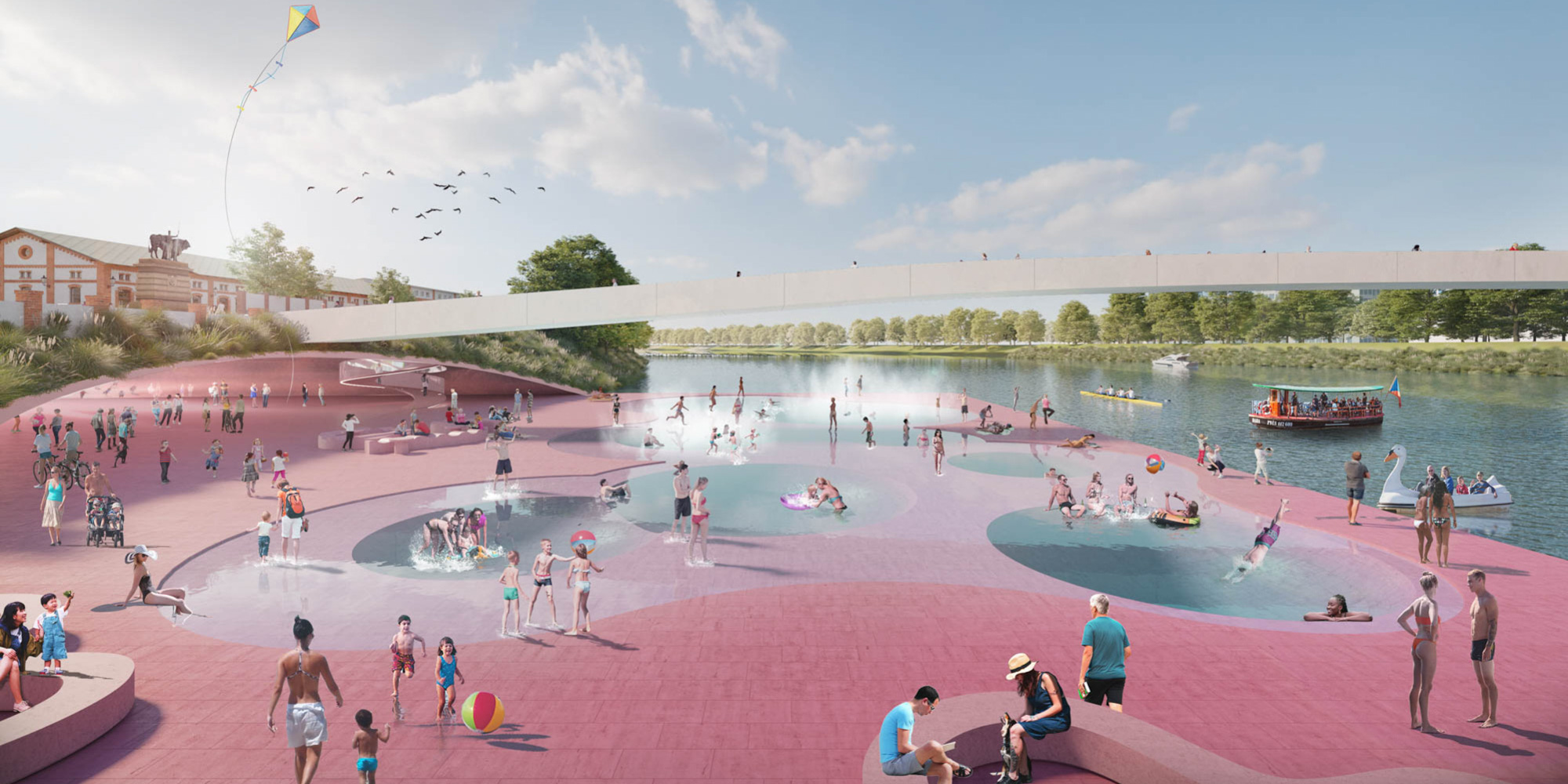 The Prague Market occupies more than 100,000 square meters of riverfront-adjacent land in the growing arts district of Holešovice. The site has been a protected cultural monument of the Czech Republic since 1993. In 2021, the City launched an international competition to redesign the site, with the aim of improving the functionality, sophistication, safety, ecology and aesthetics of public space among the buildings forming the market. RIOS represented the only US-led entry and was one of 18 studios across nine countries to take part in the competition.

“The jury felt this bold proposal contributed well into the discussion with the most extreme connection to the river.”

Prague Market has spent most of its existence hidden behind a wall, set back from its context, and serving a singular industrial purpose. Today’s Market has the opportunity to play an entirely new role: a public stage for a multiplicity of experiences, a meeting and connecting point, a platform for civic expression that fosters inclusion and diversity.

To open the site to new forms of social cohesion and belonging, we propose a cut — the revealing of a new ground rich with novel spatial datums and programmatic opportunities. The excavated material is redeployed on the site, re-contextualizing the functional and historic elements of the existing campus, and establishing a new ground for increasingly diverse experiential moments. 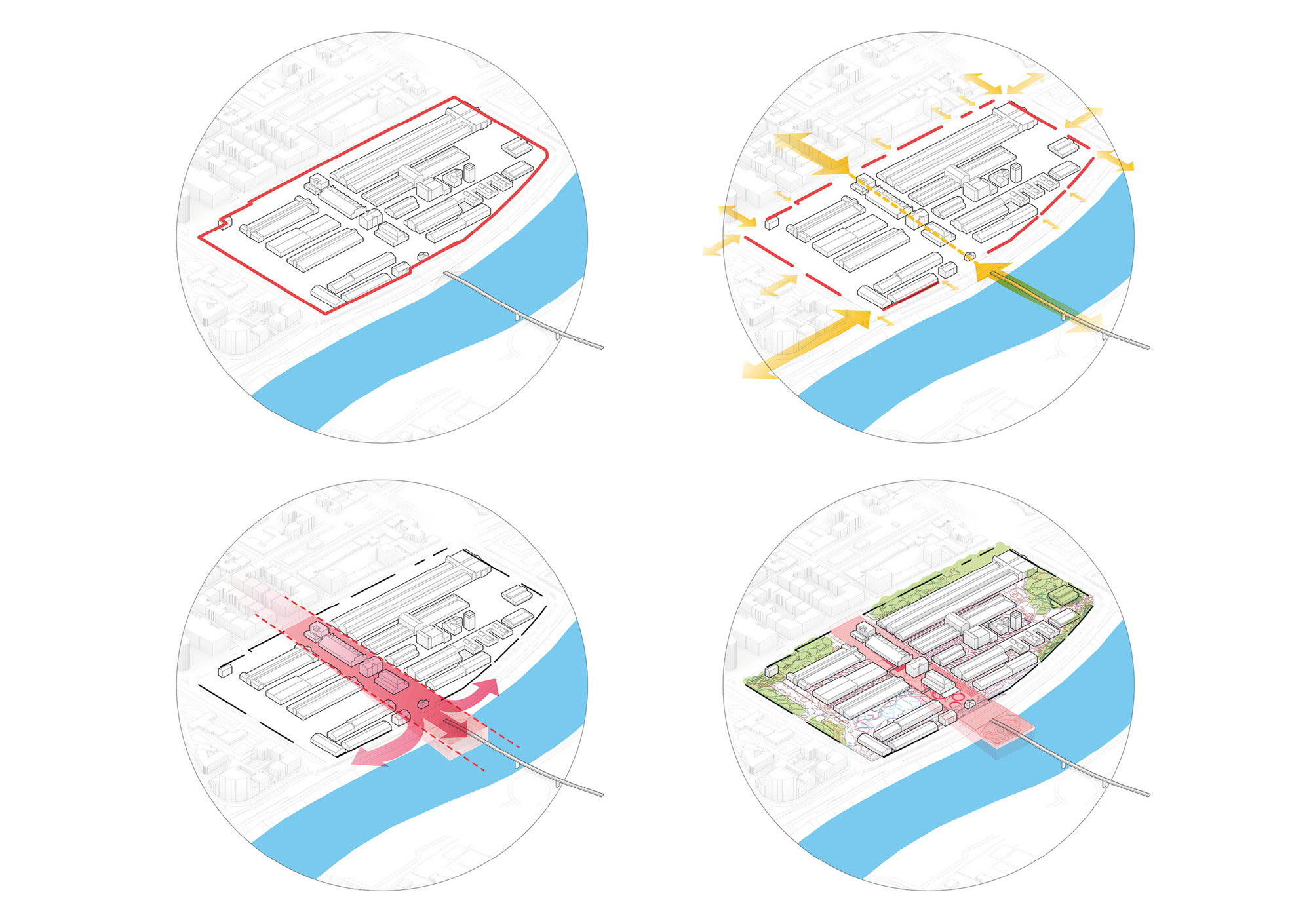 Constructed as Prague’s central slaughterhouse, the site’s straight-forward purpose resulted in several of its current functional challenges. This includes a largely intact perimeter wall that physically and visually isolates the site from its community.

The site’s historic central axis is excavated to generate a new ground plane that gently slopes beneath Bubenské nábřeží and unfolds directly into the Vltava. The north-south cut also places its buildings on a pedestal, revealing contemporary architecture and programs beneath, and celebrating the interplay between the old and new.

Open to the City

Instead of decommissioning the wall, the project makes intentional incisions to connect with the existing community, future development and the city at large. The wall is sliced open, placing the Market in a new dialogue with the Karlin footbridge, the planned site for the Philharmonic, the Holešovice art scene and the Bubny-Zátory master plan.

The original ground plane—historically monolithic—is broken down into zones of varying scales and characters. Breaking the ground apart makes the site richer, fostering diverse civic and intimate experiences.—one that has resonance and relevance for the next century. 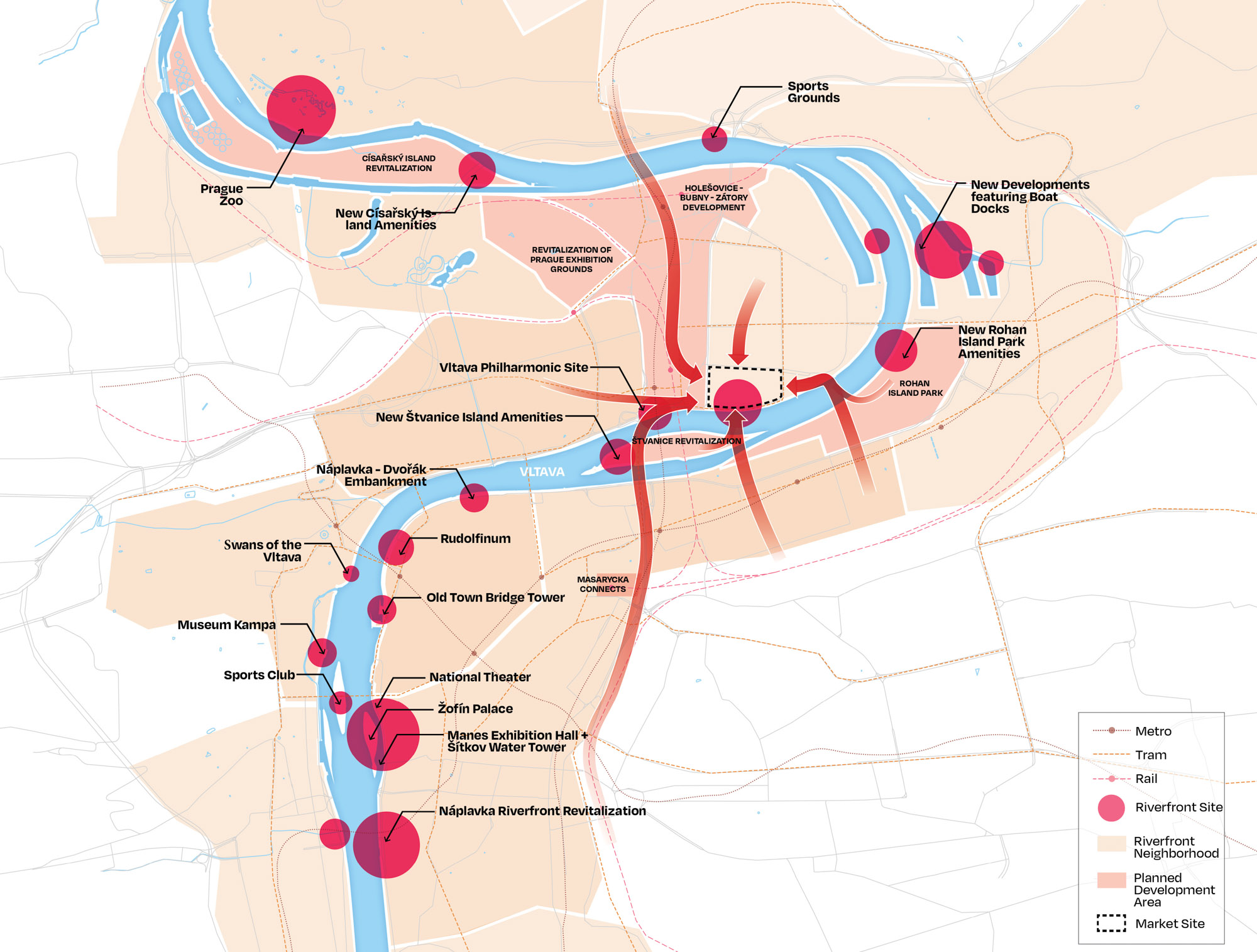 In the early 19th century, the banks of the Vltava were the city’s periphery. The river held a conflicting space in the public’s imagination—as a conduit for industrial growth and the city’s primary source of drinking water, and at the same time, a barrier for pedestrians, a flood threat, and the end of the sewer system.

Prague began a new, more civic relationship with its river in the mid-19th century. Today, the Vltava continues to get bisected by new bridges, relinked to adjacent neighborhoods, leveraged for new cultural institutions, and reprogrammed for everyday life.

The process of splicing and depositing, cutting and reassembling, has led to the evolution of the river’s form. New Ground operationalizes these same processes to bring Prague Market back into the civic imagination and people’s everyday lives.

New Ground envisions the Market as a pearl along the string of the Vltava. A socially and economically inclusive public space drawing together the surrounding Islands, Bubny-Zátory, and Prague’s Cultural Mile. The Market site supports and celebrates its neighboring cultural growth while firmly establishing its own rich, vibrant identity. 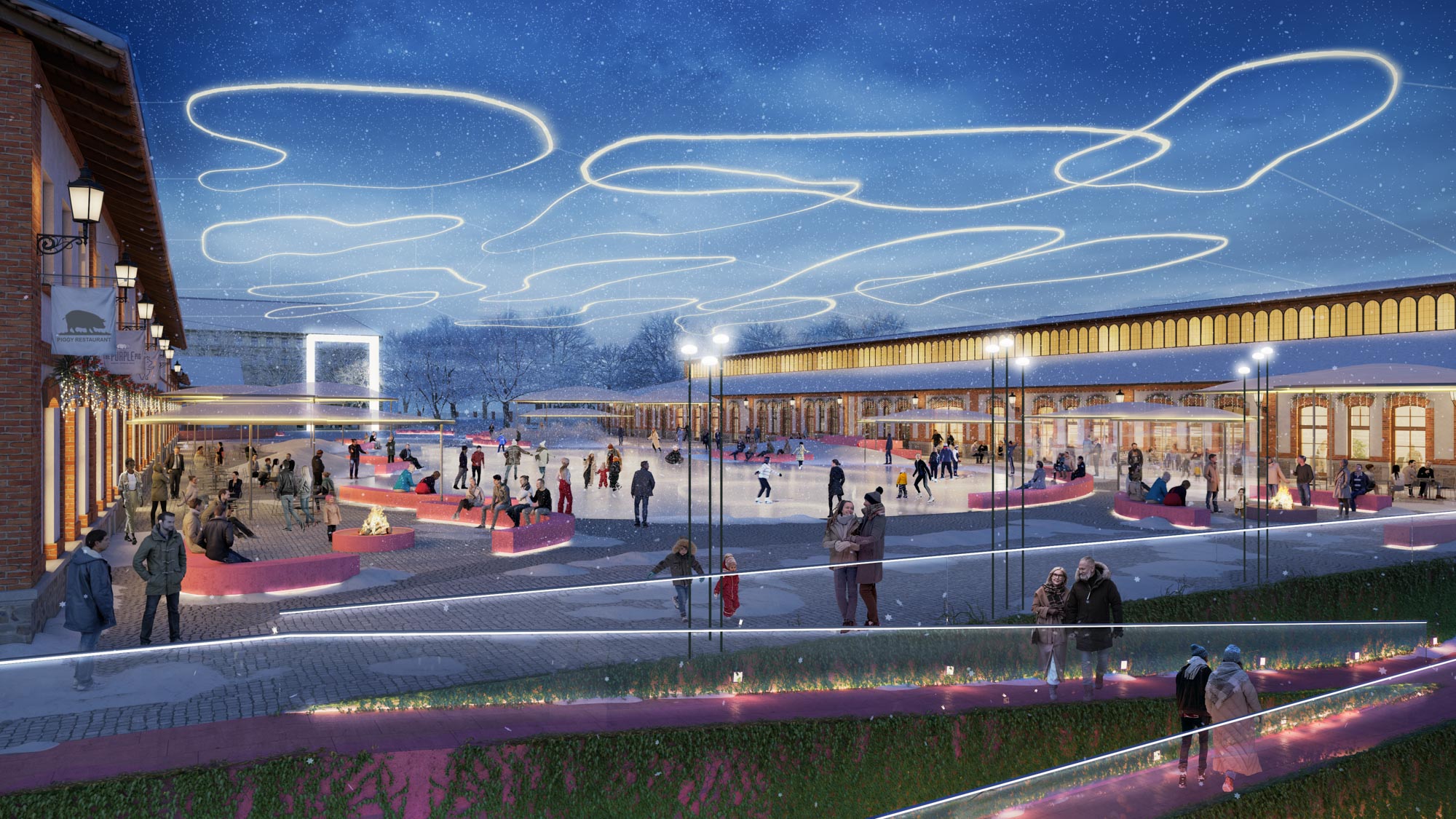 Rendering by visualarch. New Ground transforms the Market into a destination for all seasons and all people. The Water Plaza features al fresco dining, outdoor lounges with fire pits, and a sculptural light canopy. It converts from a fountain and splash pad in the summer to a dazzling ice rink in the winter. 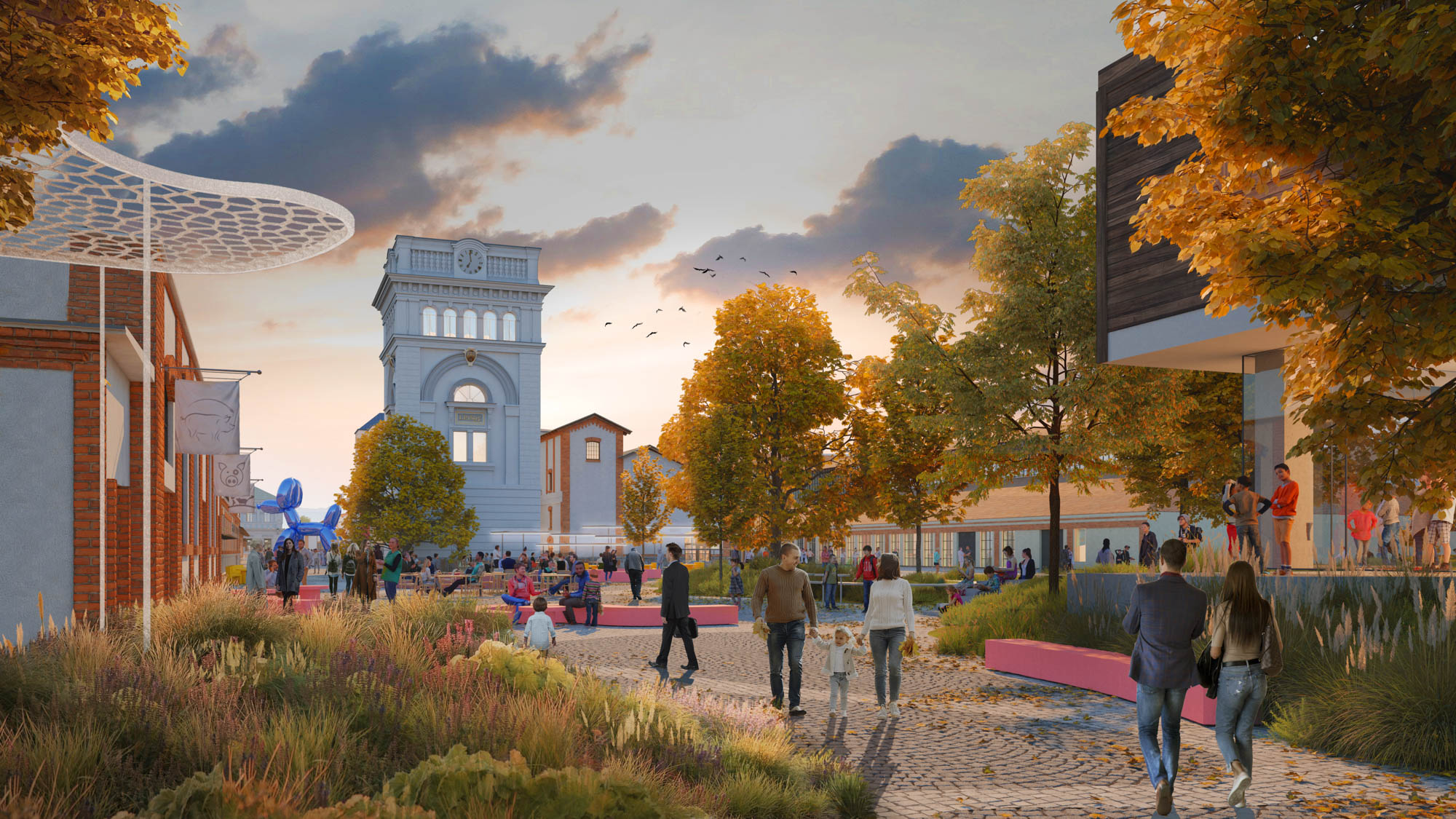 Rendering by visualarch. Prague Market is broken down to human scale. New programming like biergartens, communal seating, children’s play, and outdoor art invite a growing mix of visitors to the site. The introduction of landscape—trees, lush berms, planted canopies—breaks the visual barrier of the wall, stitching the site into its broader district. 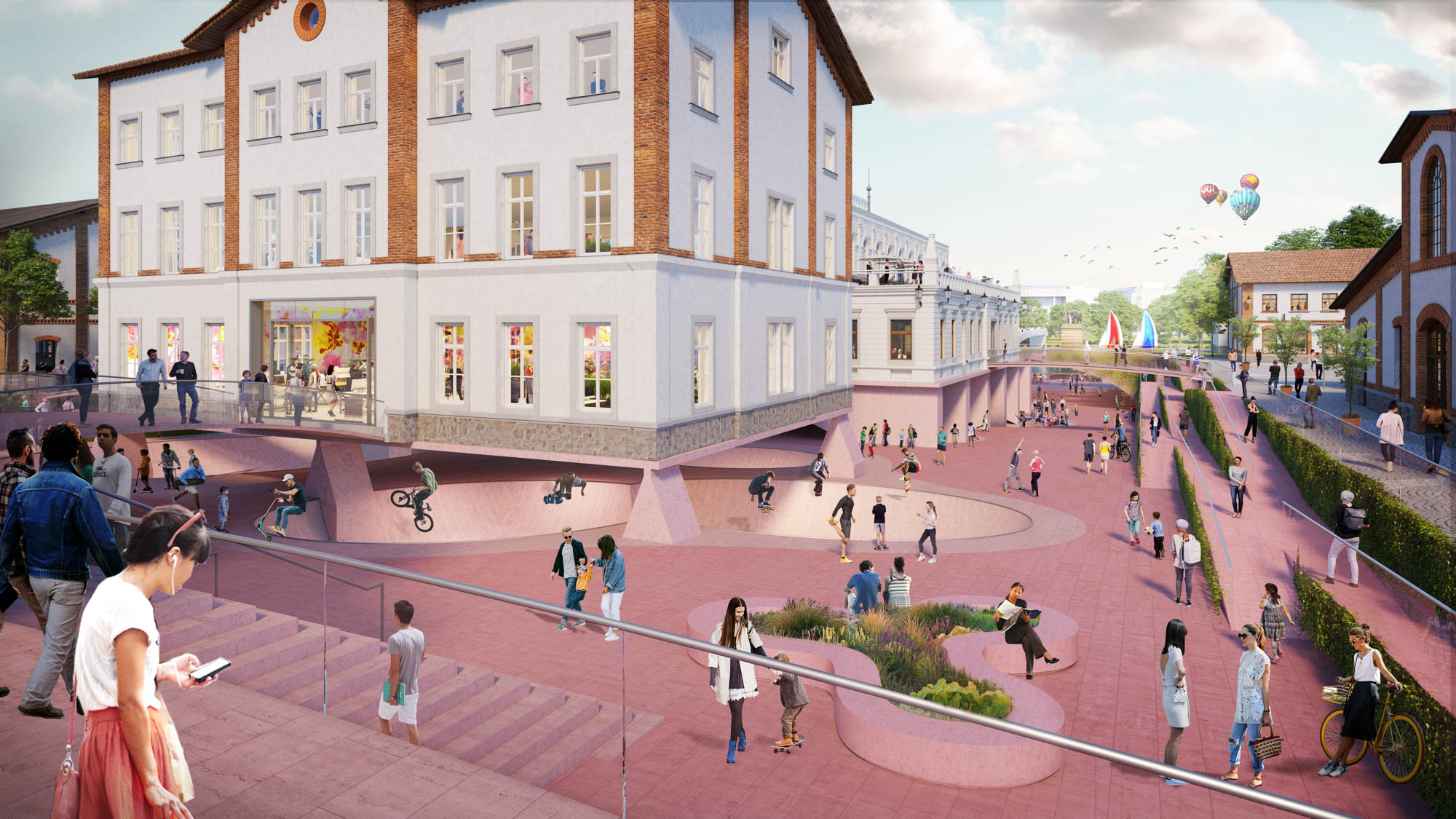 Rendering by visualarch. Prague Market was created to fulfill a singular goal of meat manufacturing. Its walls, buildings and roadways all served this ideal. The project invites the site to play an evolved role as a public stage for a multiplicity of experiences, a meeting and connecting point, a platform for civic expression that generates diversity by introducing new and unexpected program opportunities year-round.

Rendering by visualarch. This north-south axis reaches beyond (and below) the Market’s wall, culminating in a new náplavka for the city of Prague. As it touches down into the Vltava, the new riverfront plaza provides a meaningful space to linger, celebrate as a community, and connect to adjacent neighborhoods by bridge and water.

Landscaped berms, porous pavers and canopies around the site edges collect rainfall. While some of these features cleanse the water before it hits impervious surfaces, others capture and route stormwater directly to underground cisterns where it can be filtered and reused on the site, or stored for slower release. 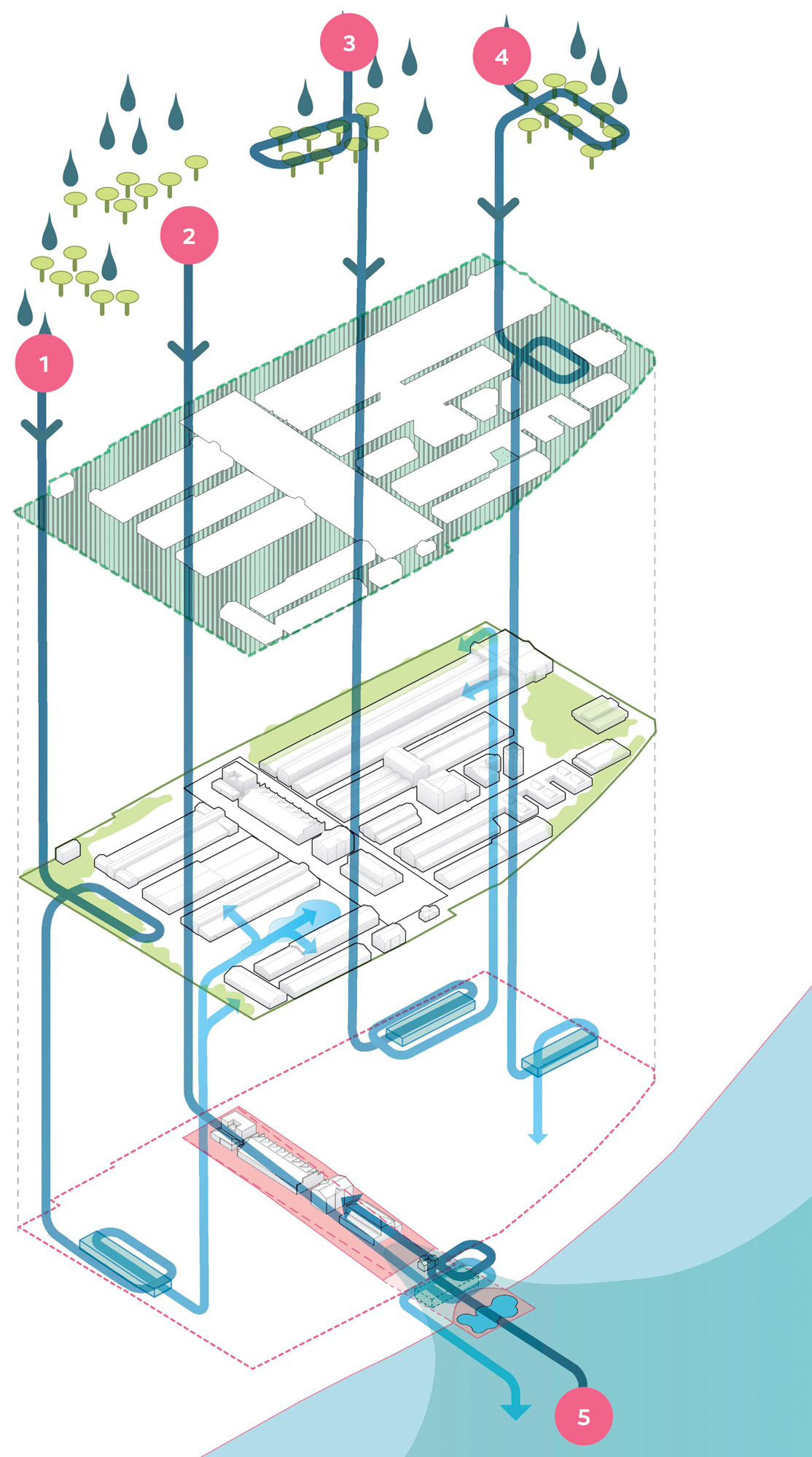 Canopies are clustered in key areas throughout the site—at parking, site edges and social areas—and provide varying levels of shade, rainwater collection and biofiltration. Planted canopies reuse extracted soil to provide pollinator and habitat support and an enhanced connection to nature for visitors and the community.

Our proposed paving pattern, which reutilizes cobbles from the existing site, finds inspiration from the Market’s utilitarian history. Just as each cut of meat reveals its own character, each pattern establishes its own programmatic and experiential zone across the site. 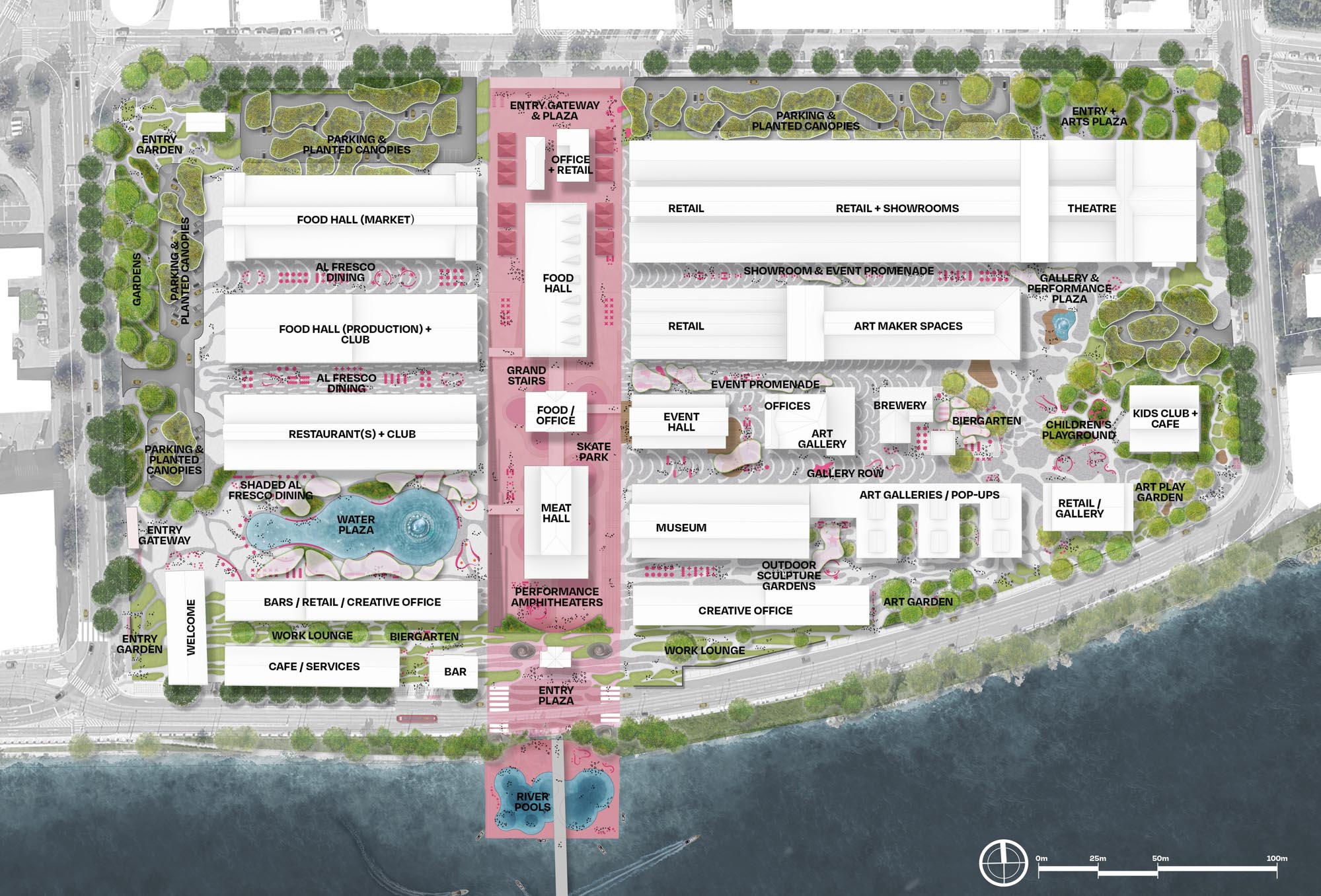 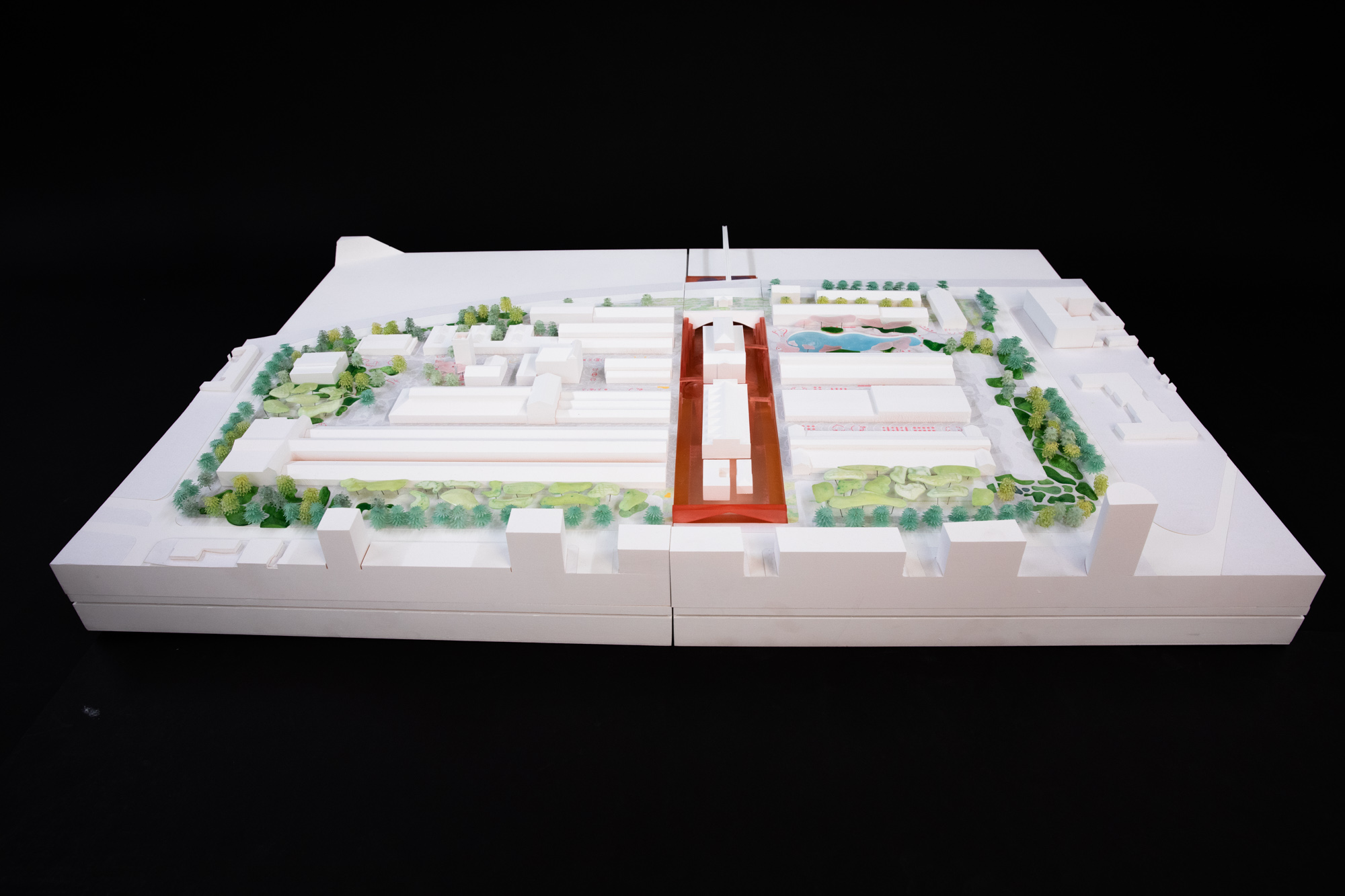 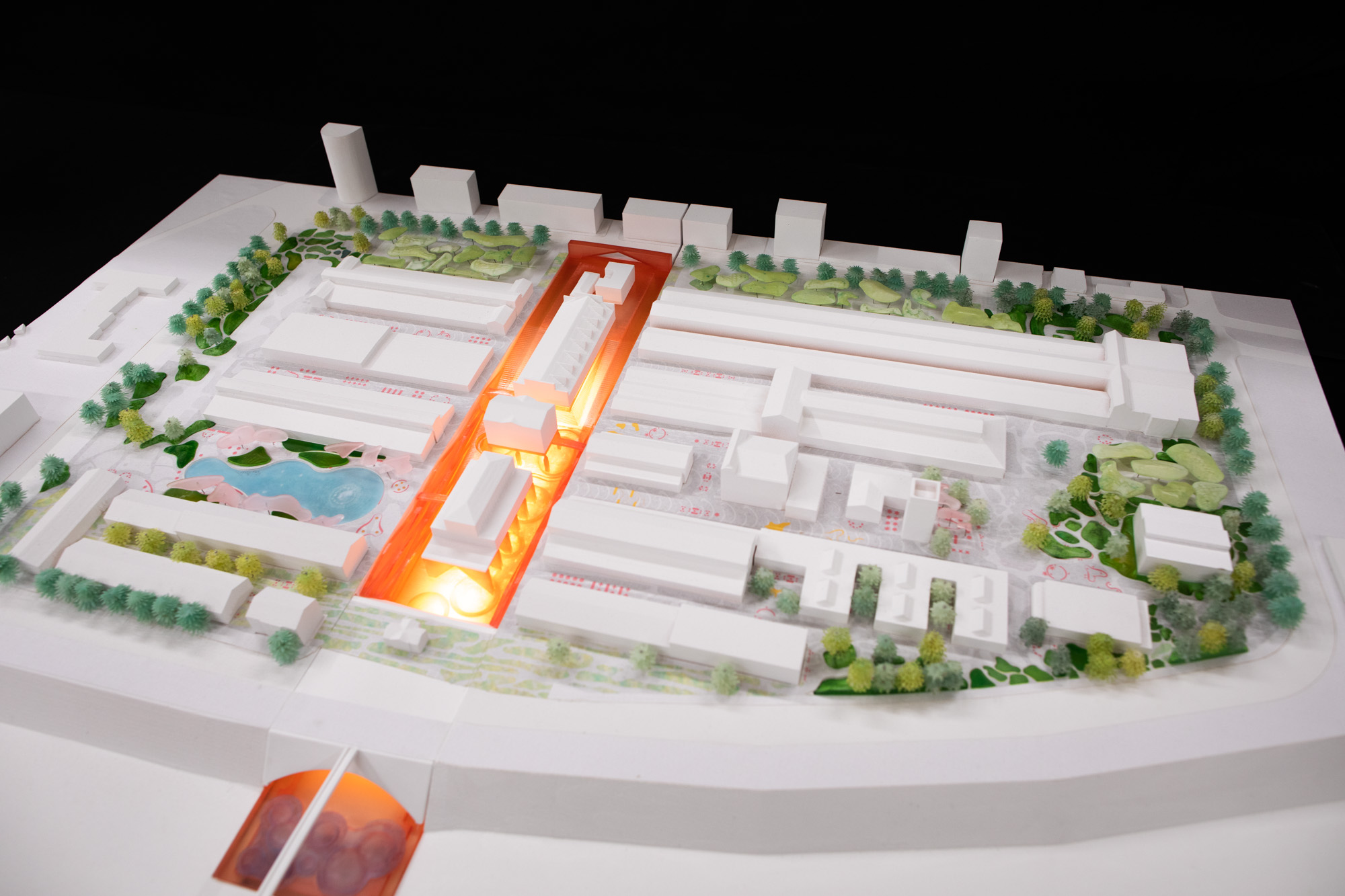