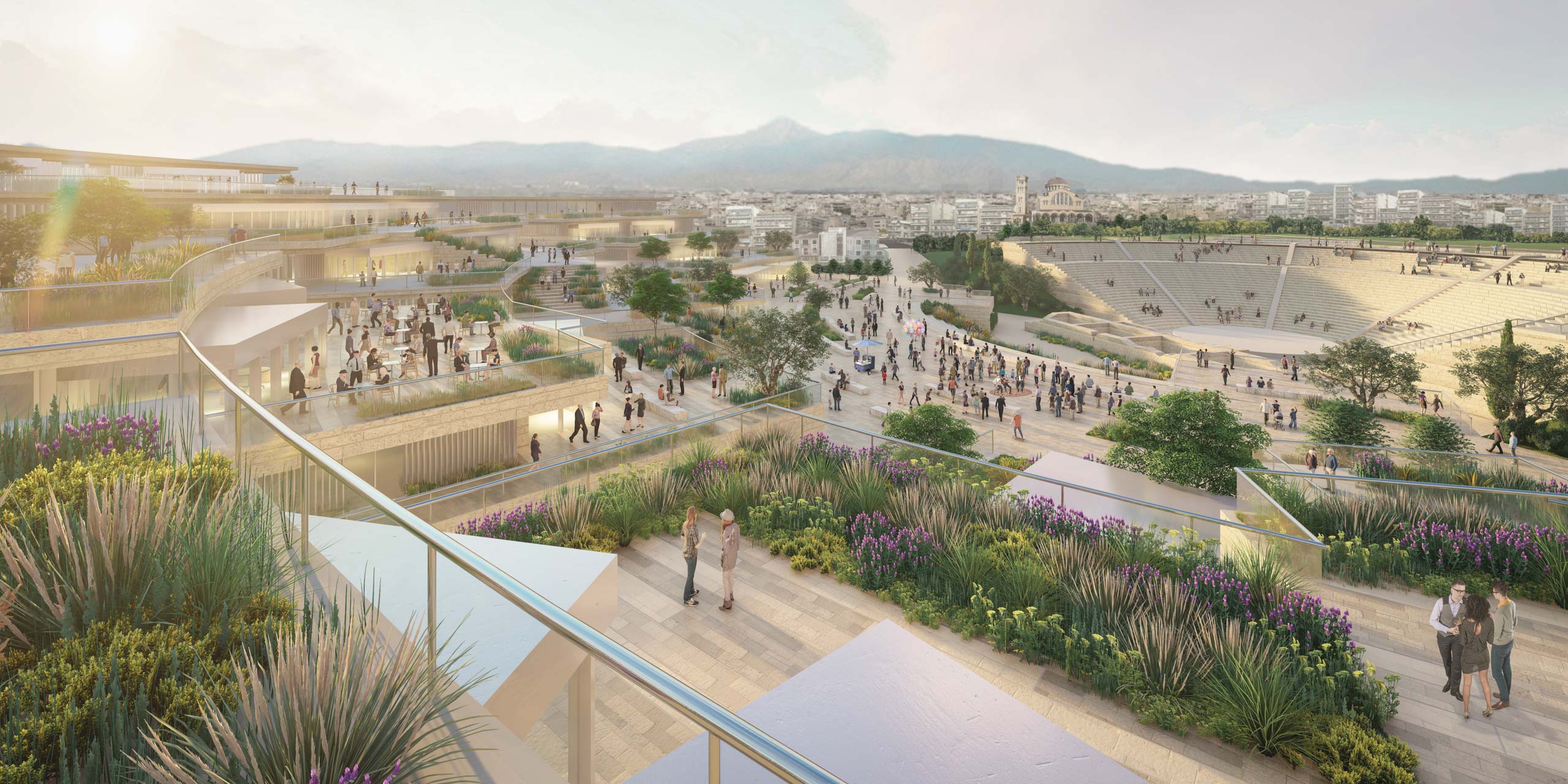 View from building terraces at the proposed Larissa, Greece.

The Municipality of Larissa in Greece launched an International Open Ideas Competition for the Design of the Surrounding Area of the Ancient Theatre A’ of Larissa.

The existing urban fabric of Larissa is tightly packed around the Ancient Amphitheatre that was once buried under buildings for centuries, leaving little room to appreciate the significance of one of the most important landmarks in the city. We believe that creating space around the theatre is vital to the successful revitalization of the area.

RIOS’ proposal transforms the ancient open-air theatre into a lively mixed-use district with public open spaces that radiate from this new urban heart. Our master plan re-centers the city around the Amphitheatre and repositions nearby landmarks, the Agios Achillios Cathedral and Central Square, to create new centers of gravity that promote urban life, cultural attraction, and the visibility and iconography of the city.

A Vision for Larissa

The Amphitheater has the potential to propel the city onto a global stage and attract visitors from around the world. At the heart of the new Larissa, our proposal gives the Amphitheatre ‘space to breathe’ by introducing a generous urban plaza wrapping the southern end of the ruins and creating a ‘theatre in the round’ for the restored amphitheatre. We propose the creation of six new Amphitheatre District buildings to make the area a true tourist destination and center of urban life. 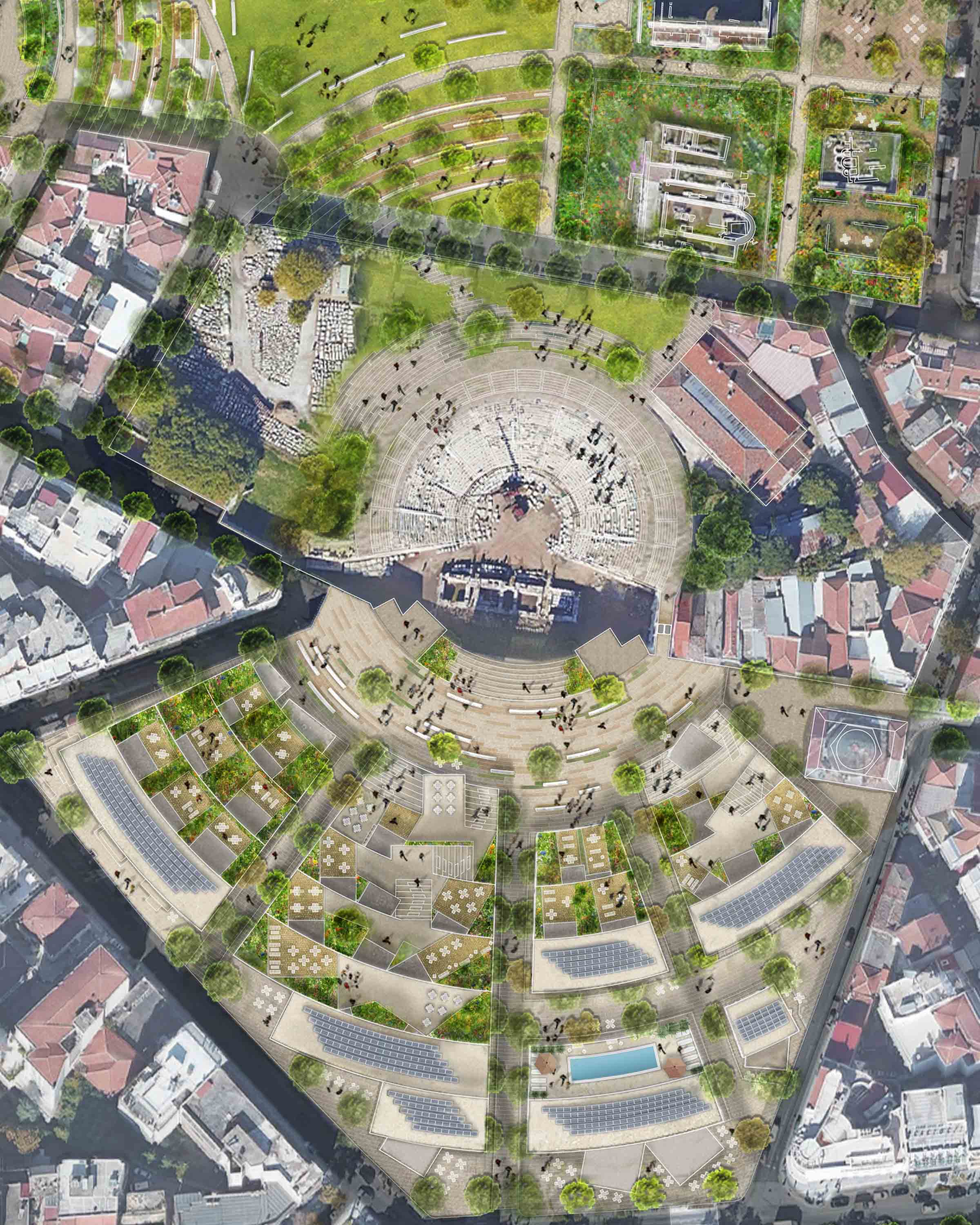 A new, renovated Square surrounding the Cathedral provides a flexible public space for events and festivals. An inviting series of radial steps interspersed with a lift and programmed café spaces create a welcoming atmosphere from the street.

The Cathedral Steps radiate around the base of the Cathedral into a series of Garden Terraces overlooking the Pinios River and surrounding landscape. Like an inverted botanical Amphitheatre, cascading gardens spill over the stone terraces. Shaded areas for seating integrate with the terrace walls, and winding pathways lined with trees offer comfortable moments for promenading and taking in the surrounding views. A new pedestrian bridge links Fortress Hill to the Pinios River Park and a wide-open space network. 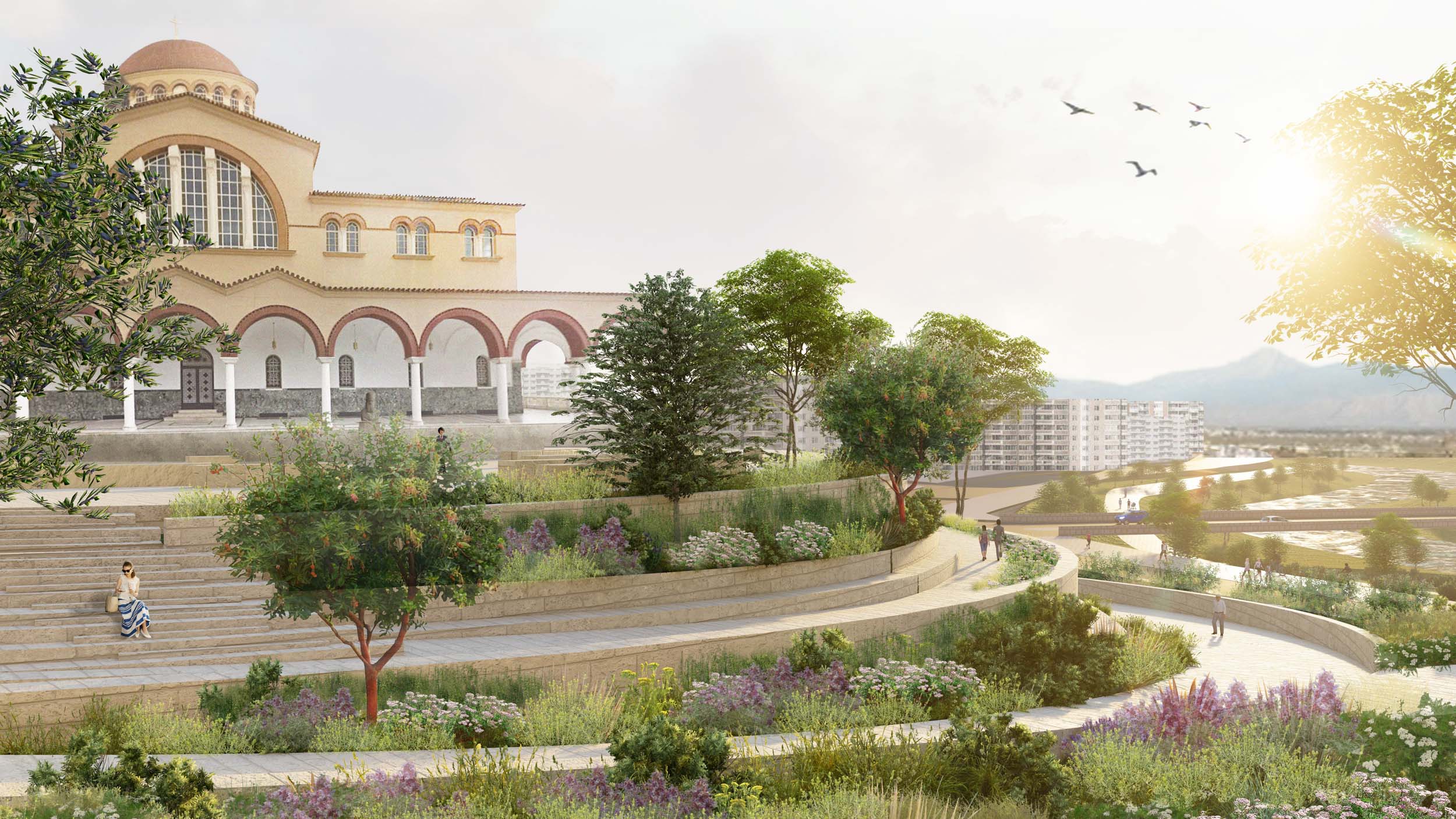 Garden terraces and bridge at the proposed district in Larissa, Greece.

The central open space of Fortress Hill is envisaged as a Green Agora – a flexible open space and shaded public garden for gathering, markets, and events as well as calm and relaxation in the middle of the city. Primary pedestrian paths are reoriented to reinforce connections between landmarks, with a new central promenade connecting the Cathedral Plaza to a framed view of the 14th century Ottoman Bezesteni.

The wealth of existing archaeological monuments are repositioned within a setting of floral abundance. Immersed in a series of botanical gardens and shaded outdoor gardens, the ruins and surrounding areas are ‘wilded’ with native plants and local agriculture from different regions of Greece, supporting local ecologies and pollinator habitats.

Botanical gardens at the proposed district in Larissa, Greece.

The plaza space in front of the existing War Memorial is an ideal location for an annual temporary pavilion that can host events and attract visitors. Modeled after the rotating Serpentine Pavilion in London, the Larissa Pavilion showcases new and emerging artistic and design talent from across Greece and beyond.

The Central Square is refocused around the existing ‘Floating River’ fountain, which is enhanced with interactive and atmospheric elements. Radial gardens and gathering spaces are threaded through the existing mature tree canopy. 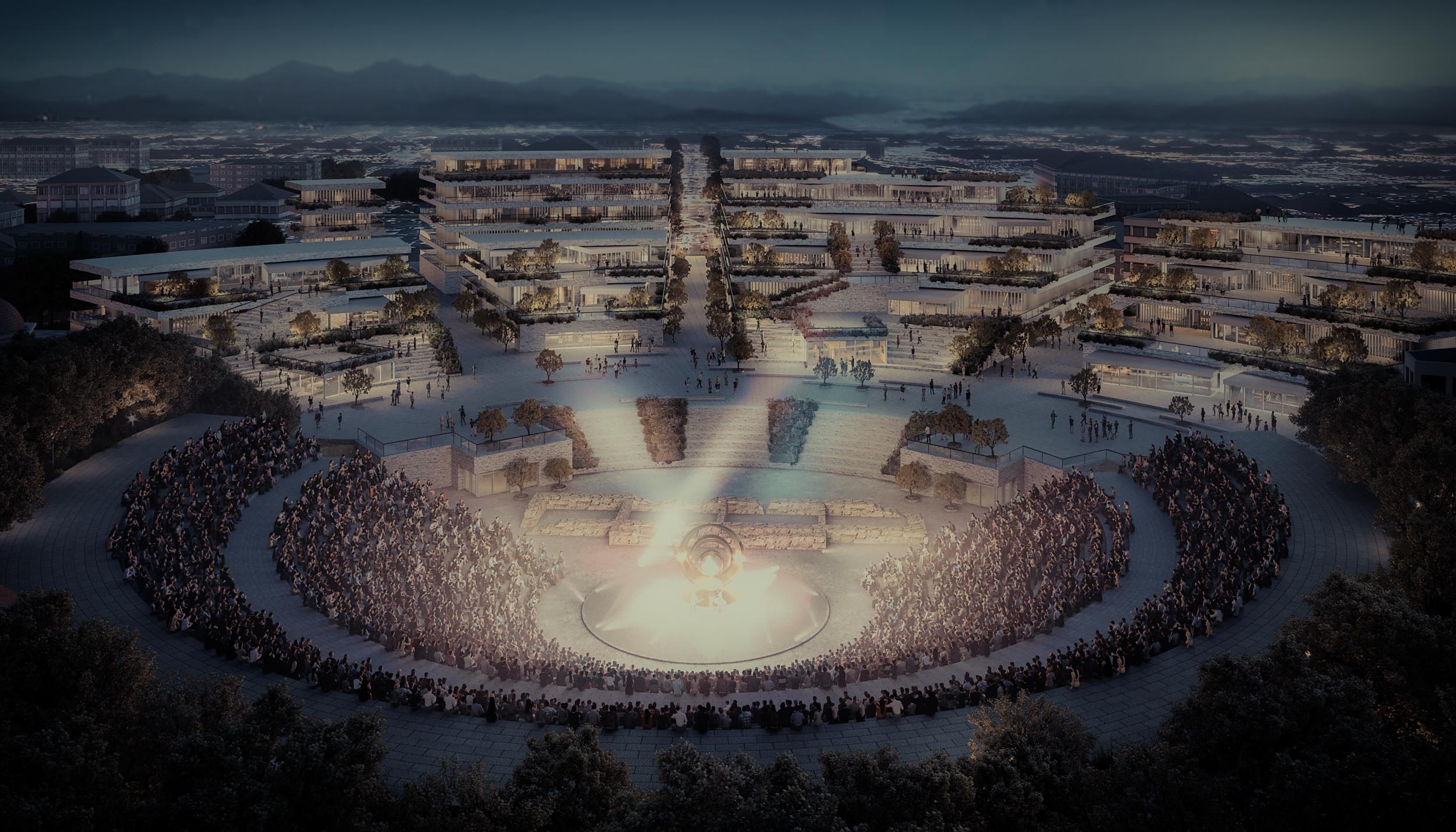 The Ampitheatre at night. Visualization by ATCHAIN.

Our blend of cultural, hospitality, commercial, and residential uses located near the Ancient Amphitheater creates a world-class theatre district. 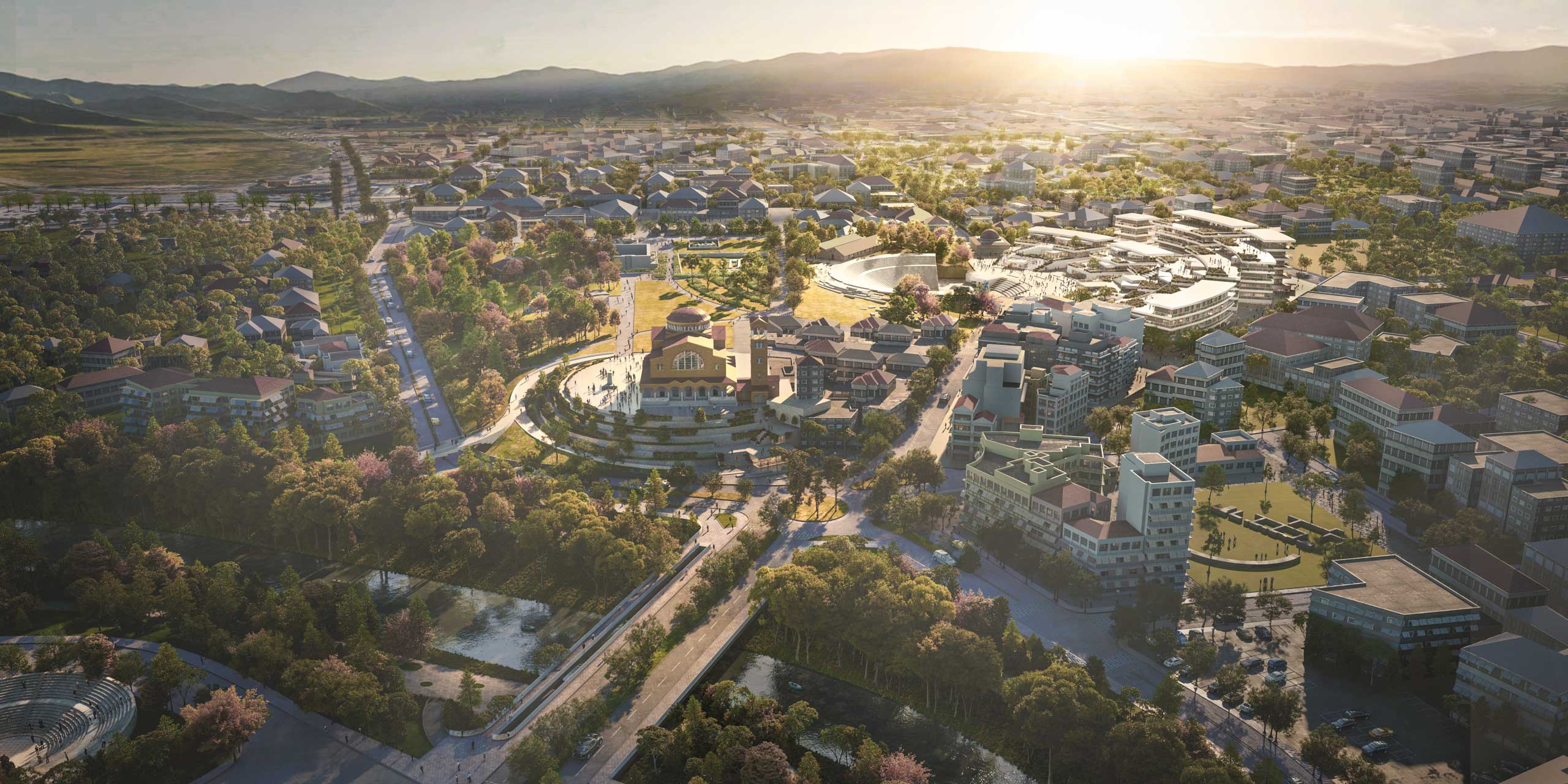 Aerial of the proposed district in Larissa, Greece. Visualization by ATCHAIN.