LOS ANGELES – July 11, 2019 – The Music Center today announced it will re-open The Music Center Plaza with a civic ceremony on August 28, 2019 and free public festivities throughout Labor Day weekend (from Friday, August 30–Sunday, September 1, 2019) following a 20-month $41 million renovation of the expansive outdoor space. The 53-year-old Plaza has been updated into an accessible, welcoming outdoor urban space as a “plaza for all” to enjoy. Serving as a principal public square for Los Angeles County, the reimagined Plaza creates a fifth venue at The Music Center campus, providing a place where people can not only dine and gather, but also connect with friends and colleagues. The Plaza will be home to free and low-cost events and activities that showcase the talents of the many artists and distinctive communities that comprise the culturally rich County of Los Angeles. 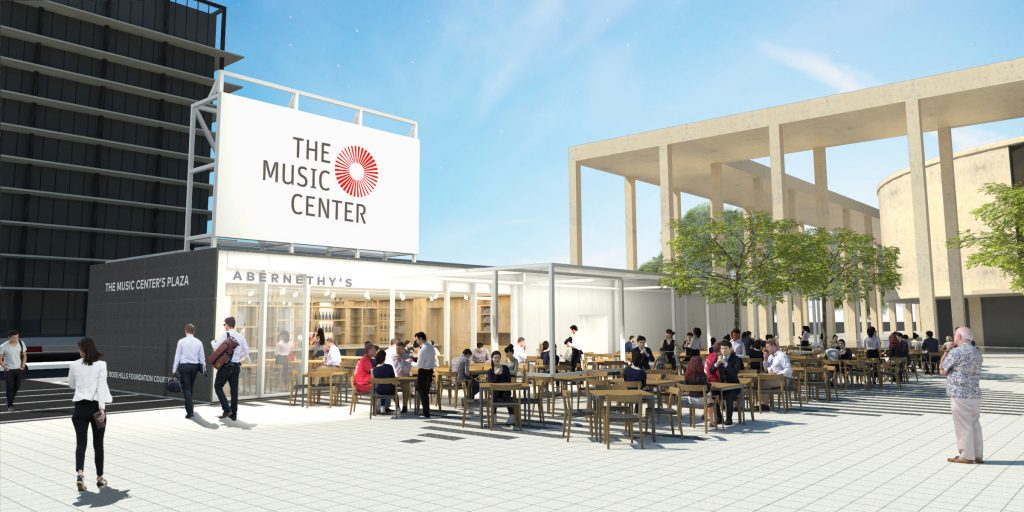 “The redesign of The Music Center Plaza creates an inviting, wide-open space and provides Angelenos with an urban oasis, whether they are in between meetings in the busy civic center or just looking to relax and enjoy the sights of Downtown L.A.,” said Rachel S. Moore, president and CEO of The Music Center. “We are thrilled to see the Plaza become a location that welcomes guests from all corners of our great county to enjoy the new dining options and future programming planned for this engaging space. We hope everyone will join us as we inaugurate this beautiful new outdoor venue with free community events over Labor Day weekend.”

The award-winning, Los Angeles-based multidisciplinary architecture and design firm, RIOS (RIOS), which also designed Grand Park, Grand Avenue Streetscape and led the renovation of The Music Center’s Mark Taper Forum, was at the helm of the Plaza redesign. Construction began in January 2018 and will be completed this month. In its efforts to update the infrastructure and construct the five new buildings, RIOS created tranquil, landscaped vistas that face Grand Park on the eastern end of the Plaza; featuring native and drought-tolerant plants, the gardens will allow wining and dining al fresco adjacent to The Mullin Wine Bar and Go Get Em Tiger. In its design approach for The Music Center Plaza, RIOS raised the Plaza to a single level and reconfigured the stairs to Grand Avenue allowing for more open space during public events and performances. As a result, the redesign enhances the connection to the community providing accessibility and visually connecting The Music Center to Grand Park, leveraging the synergies between two major county assets. 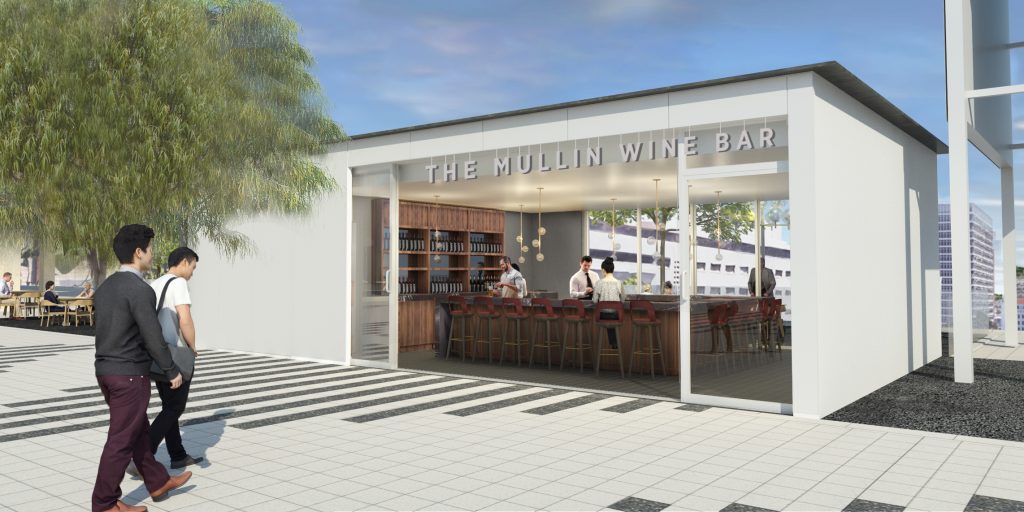 The Plaza re-opening will also mark the return of The Music Center Plaza fountain, a centerpiece of the space, while the Jacques Lipchitz-designed “Peace on Earth” sculpture was relocated to a more prominent position within The Music Center complex. In addition, guests can interact with two new 12’ x 20’ LED screens along with sensors and cameras to create their own art in new and iterative ways. The Music Center is working with long-time partner yU+co, a Hollywood-based digital design studio, to develop interactive software that will allow the screens to become a platform for crowd-activated art. The screens also will be used for live events, simulcasts, programming information and more. The Lisa Specht Welcome Center will also feature a 6’ x 20’ interactive screen with visitor information and special surprises.

“After many years of envisioning what The Music Center Plaza could be, we can’t wait to share the outcome of the renovations, as we turn the fountain back on and light up the LED screens this August,” added Howard Sherman, executive vice president & chief operating officer, The Music Center Ops. “We’ve worked with amazing partners, including the County of Los Angeles, RIOS and Matt Construction, to develop a dynamic space that is not only ahead of schedule, but also exceeds expectations by providing a platform for infinite opportunities and experiences.”

Major funding for the $41 million Plaza project came from the County of Los Angeles, which provided $30 million. In addition, The Music Center has raised over $10 million in private funds and is raising $1 million for the LED screens. Lead gifts were received from Lisa Specht, current chair of The Music Center, and vice chairs Robert J. Abernethy and Cindy Miscikowski and the Ring-Miscikowski Foundation/The Ring Foundation. Significant support was also received from The Blue Ribbon, Mimi and Marie Song, Fredric Roberts, Merle and Peter Mullin, and Eva and Marc Stern. Major grants were awarded by The Ahmanson Foundation, The Ralph M. Parsons Foundation and The Rose Hills Foundation. As The Music Center completes fundraising for Plaza capital needs, it turns its attention to raising funds for programs that will bring the Plaza to life. To date, The Music Center has raised $3.3 million toward a goal of $5 million in support of free and low-cost community programs. 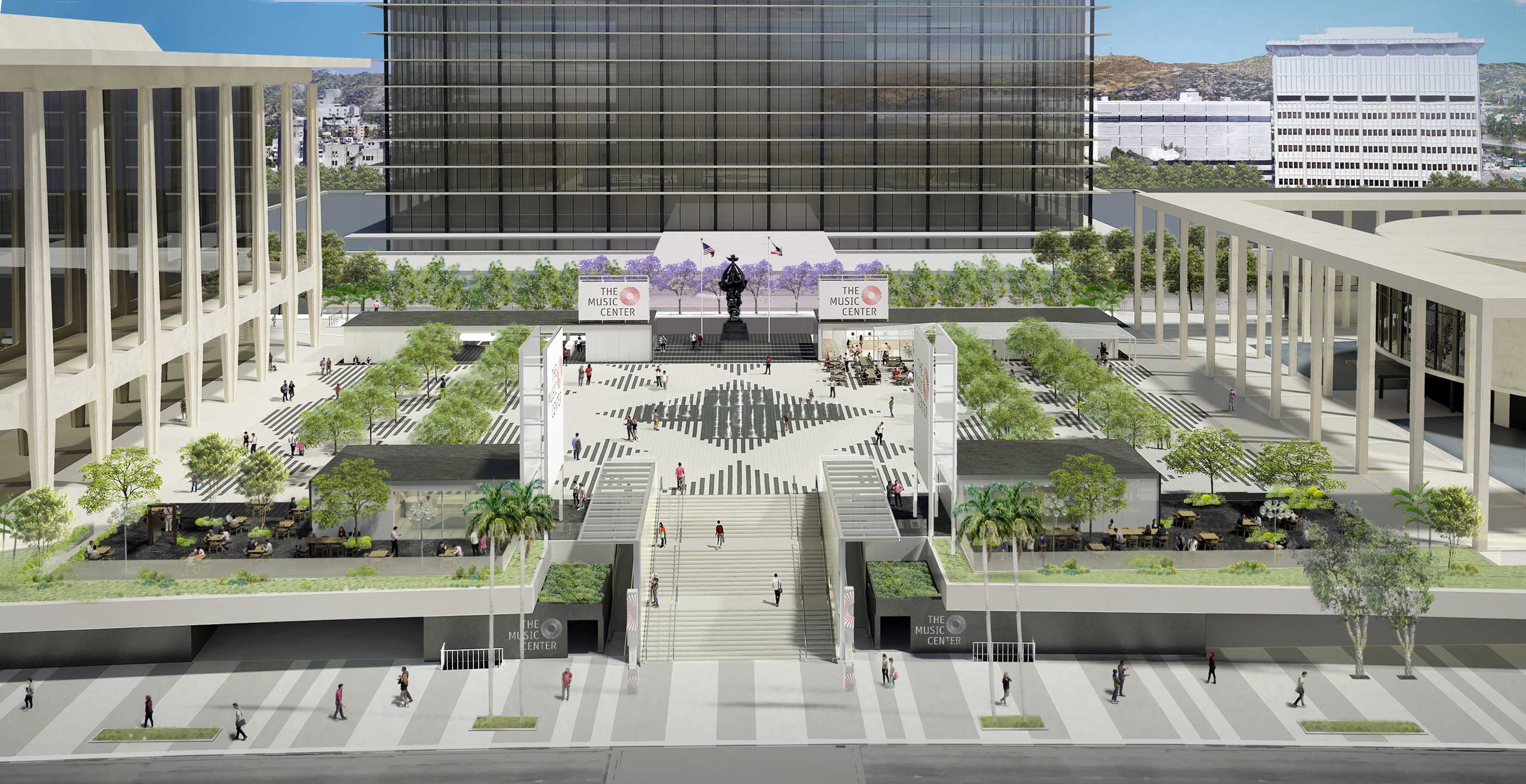